The Greetings from East Lansing Mural by Greetings Tour

The Greetings from East Lansing mural is finished.  And it is AWESOME!

Just a week before we stopped and spoke with both Muralist Victor Ving and Photographer Lisa Beggs.  Victor and Lisa are the traveling couple that make up the Greetings Tour.  And since 2015 have traveled 24 states and hope to hit all 50.

Victor and Lisa lived in New York City and now are based in California.  They shared they once spent lots of time in their brightly painted RV yet this time stayed at the Marriott in East Lansing.

When we first spoke with Victor, he said East Lansing was the 50th Official Greetings Tour mural – and first Greetings Tour mural in Michigan, Go GREEN!  The furthest being Hawaii and Fargo, North Dakota is next in line (and then Jackson, MI after). You will find their murals from Los Angeles to Jersey City and El Paso to Anchorage.  Greetings from East Lansing was inspired by vintage style postcards.  Other types of inspiration and examples can be found HERE.

The Greetings from East Lansing mural was almost 3 years in the making and a true community effort.  The East Lansing Mayor Aaron Stephens joked about the mural project progress moved at, “the speed of government,” sometimes.  Yet we think you’ll agree – well worth the wait.

The almost 11 feet by 51 feet wall sized postcard is behind the Roadhouse Pub on a southward facing concrete wall.  Anyone traveling northbound on Harrison road will appreciate this new addition for years and years to come.

This project was made possible by Percent Art Ordinance which allocates a mandatory 1% of the City of East Lansing’s project costs to be used annually for art in the community. 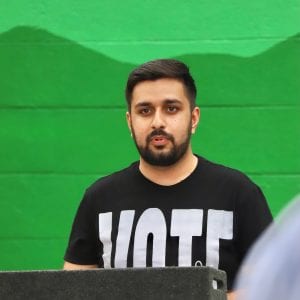 The Official Greetings Tour enlists a crew of local artists in its projects.  Mainly painted in spray paint – Greetings from East Lansing mural incorporated the skill of an area graffiti artist and sign maker seems on point.  Samskee of Lansing and Detroit Sign Painters

Lisa also explained that Sparty looks so much like the actual mascot because of the texture of the wall.  GO GREEN!  If you visit, look for the black squirrel.  Also try to find Victor and Lisa – they – as a painted version, will stay with us in East Lansing. Take a selfie when you visit the mural.  Then share a photo and use the hashtags #greetingstour and #greetingsfromeastlansing.

And per the Greetings Tour on Instagram, “It’s now the public’s turn to get creative with their photos in front of the mural!  Hope to see some cool art made in collaboration with our art soon.”

“Are you always together?”  Lisa inquired as she asked what ELAMom’s thought of the finished piece.  “Sometimes…” we replied, especially when we get to share something like this!  Until we are out and about next time, cheers.

Instagram Reel of the Greetings from East Lansing mural