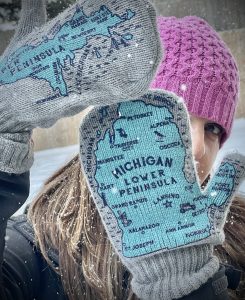 On this day in 1837, Michigan became the 26th state to join the union.

Some quick Michigan history (thanks for the refresher lesson via HISTORY).

Did you also know the preceding December, Michigan reluctantly accepted a Congressional compromise that asked it relinquish its claims on the Toledo Strip (a small strip of land that would have made the southernmost border of the mitten almost a straight line) in exchange for admittance to the union as the 26th state and further compensated with 9,000 square miles of land – the Upper Peninsula.

At the time, many Michiganders considered the trade-off a bad deal. Oh what a difference the Mackinac Bridge made.  And the copper.  And the iron ore.

Does anyone still have a Say Yes to Michigan shirt?

Since we are just smitten with the mitten tonight – – – thanks for putting that on a shirt Michigan Awesome – – Where is your favorite place for a Michigan day trip?

We are looking to go for a drive.

And my mother-in-law picked these mittens up a few years ago at the Michigan Historical Museum – Library of Michigan gift shop – aren’t they great? 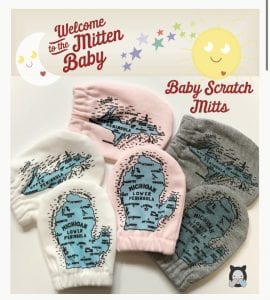 Thanks for sharing the fun product photos Michigan Mittens. Baby versions above, adult and kids below

What began as a Michigan statehood social media post yielded a conversation with the creator of Michigan Mittens.

As social media networking often times works, we shared a photo, then it was shared as a story and then they posted about us.

Being new and still working on more followers, we were doing backflips in the snow wearing Michigan Mittens when we saw their Facebook and Instagram post from last night.

Their website is great.  It has lots of colorful options and one of us may have purchased newborn mittens for someone who just spilled the beans.  And may we add, within a few minutes a message was received the order had been shipped.

We learned the mitten idea came to Connie when she and her husband, Erich, were driving home from the UP.   And Connie was so kind to answer a few questions….

My son wanted to know how the the cities on the mittens were chosen:
“We selected the cities mostly to cover both peninsulas evenly for aesthetics but also to include some well known areas. We have also held contests to have our fans choose new cities to add to our mitten maps. We plan to do this again soon.”

Then my daughter chimed in and asked how do they pick colors:
“…we started out with a few basics then added more based on suggestions from our customers. Our top selling colors are Fog Grey (in our photo) and Hunter Plaid.” 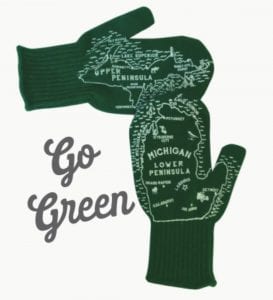 While I was reading Connie’s response, Nora asked, “did she say pink?”
“…we have been trying to find a proper pink yarn for our mittens for a long time.  It’s not as easy as one might think. There are only a handful of true production knitters left in America.  She also mentioned that they plan to partner up with a local organization in October to benefit breast cancer patients.”

My question was what has been your most memorable interaction since introducing your mittens years ago?
“I would have to say our most memorable interaction so far was being invited to the White House to represent the State of Michigan at the Made in America Product Showcase in 2019. For our small business to have been selected out of all the amazing products made here was a great blessing and a true honor.”

“I must add that when I first started on this journey back in 2007, I was contacted by the CEO of Stormy Kromer who offered a helping hand and some great advice.”  And I had to share with her I was wearing my Stormy Kromer hat to have a photo taken but Nora insisted on pink. 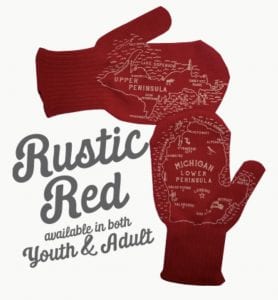 Connie added, “Our mittens are nostalgic. People love to remember.”

And to think this all began with a quick photo on social media sharing a little celebration about Michigan’s Statehood Day!