They say things happens for reasons.  Sometimes though, the reasons seem impossible to comprehend.  Yet humans, seem to need reasons.  Reasons help us understand.  And while it may seem like sense should be made out of the nonsensical – this time, the closest thing to a reason we can muster is – bad things happen to good people.  And right now, something horrific has happened to a Bath area family.

Remember the local fundraiser we shared last week?  The Bath Baseball program was selling t-shirts, wrist bands and promoted a GoFundMe account after one of their teammates was severely injured following an on field collision.  Cooper Gardner was just playing ball.  Seemingly something he enjoyed and explained during a WILX interview as,  “…when you play a sport, you basically have a family….”

WILX recently went to Bath, they stopped by the baseball field during a game and visited with Cooper and his family.  The WILX coverage and fundraiser yielded an enormous amount of outpouring of support in Bath, adjacent areas and faraway places.

The timing of the interview was perfect.  His teammates were able to hear his voice, Cooper spoke with a familiar Fighting Bee spirit and it was thought he was on the road to recovery.

Unfortunately since we originally shared, Cooper unexpectedly passed away at home last weekend.  We want to share this fundraiser with ELAMom followers again because while the direction may have changed the intent to continue to support Cooper’s family remains unchanged.

We have been squeezing our kids a little tighter.   And we hope this small, tight-knit community continues to hold Cooper’s family even tighter. 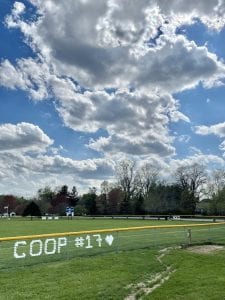